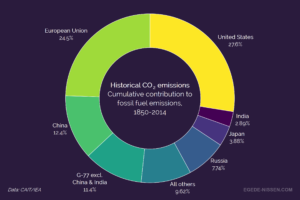 Who is responsible for global warming? Is it poor countries with large populations? Is it countries with small populations but high emissions? Is it countries with a historically high share of total emissions? The position of the developing countries since the very beginning of the international climate negotiations (in 1991) has been that we must look at who is historically responsible. They point out that the industrialized countries have produced the lion’s share of the emissions since the Industrial Revolution. Since 1850,  60% of the total, cumulative CO2 emissions (from fossil fuel and cement) have been emitted by just four political entities: the United States, the European Union, Russia and Japan.

By contrast, the Group of 77, a political coalition of 134 developing countries, has arrived late to the emissions party. Excluding their two biggest members, China and India, it is collectively responsible for less than 12% of historical emissions.

In other words, it is the industrialized countries that are mainly responsible for getting into trouble. If we go back to 1991, the year the international climate negotiations began, the proportion of historical emissions emanating from industrialized countries would have been even higher. Ever since, states have been haggling over who should act first to stop the problem getting worse. The US in particular has argued that current big emitters must also take responsibility, and China in particular. The Middle Kingdom is currently responsible for almost 30% of annual CO2 emissions. Past emissions were produced by developed countries, but future emissions will come from the developing world.

Developing countries argue that the advanced economies have fundamentally failed in their responsibility to ‘take the lead’ on mitigation. In 1992, in the framework convention on climate change, the developed countries of that time agreed that they would have the main responsibility for cutting emissions. It is clear that they have mostly failed to do that. The developing countries argue that rich countries must cut their ‘luxury emissions’ before poor countries cut their ‘survival emissions’. This dispute essentially hamstrung the climate negotiations for 25 years and has never been resolved, with each side sticking to their guns.