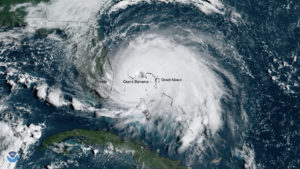 Someone just asked me if the energy produced by the human population of Florida would be enough to move the path of a hurricane. This was around the time of Hurricane Dorian, which very fortuitously turned northward right before landfall. As a species, we make a lot of heat — both with our bodies and with our activities — and there are a lot of people on the Atlantic coast. But enough to make a difference? My intuition says no, yet no one has done the math to my knowledge, so let’s do it, just for fun.

To make this more tractable, I’ll consider one at a time, and then, at the end, compare all the numbers against the energy production of the sun and the effects of global warming.

First, we’ll need to know how much heat human bodies produce. I’ll use energy consumption (food intake) as a shortcut to quantify this.

American federal dietary guidelines recommend that the average female should eat 1,600 to 2,400 calories per day and the average male 2,000 to 3,000 calories, but everyone needs less as they grow older. It’s also a fact that people in the rich world tend to overeat. We can cut the difference and assume that Floridians, one, don’t lead overactive lives, but two, tend be older, thus requiring less food. For simplicity, let’s use 2,000 calories as the average calorie intake.

Next, we’ll have to make one heroic assumption and one totally bonkers stipulation:

Now we can have start having fun with numbers! And they’re about to become unfathomably large…

To prevent the numbers from getting way too big, we’ll use energy release over one hour. To make them comparable, everything has to be converted to joules, the standard measure of energy. I’ll give each measure in watts too since it’s easier to relate to. For example, in one hour, a 60 watt incandescent light bulb uses 216,000 joules (J) of energy.

That gives us some comparable numbers for later. Each and everyone of us is a little space heater, radiating about 100 watts of heat per hour; some more, some less. That’s enough to heat up a small space, all on our own, or if it could be converted directly to electricity, we could light up a pretty powerful incandescent bulb or power a laptop. And altogether, the people of Florida produce enough heat energy — 1.7 GWh — to match the output of an average power plant.

Now it’s time to consider the heat energy released by humanity through primary energy use — heat that we produce when driving cars, cooling houses, producing electricity and so on. It’s time for another heroic assumption, namely how much of primary energy is converted to heat. This varies widely between sources and applications. Combustion engines using gasoline are notoriously inefficient, converting only 40 percent of fuel into movement, the rest is dissipated as heat. Electric motors, on the other hand, are often be 80-90% efficient. Coal-fired power plants are somewhere in the middle.

In just one hour, an average hurricane produces 603 TWh — a totally mind-boggling amount of energy!

Can we move a hurricane?

Finally we can answer the big question. Do human activities have any chance of moving a hurricane or even affecting it a little bit?

And by orders of magnitude, in joules:

If we look at the sheer size of the numbers, there’s no contest — four orders of magnitude separate the energy released by humans and hurricanes.

Standing packed together in West Palm Beach, all the people of Florida would give up a fair bit of heat, enough to make a slight local high pressure field, as hot air expands. Perhaps a few metres into the air, and covering a small area — let’s give them 1.5 square miles, or 2.6 square kilometres.

By constraast, a hurricane is a low pressure system covering thousands of square kilometres (miles) and it reaches thousands of metres (yards) into the sky.

In terms of its energy release, the human population is a butterfly in a… well, a hurricane.

But we do move hurricanes!

Nevertheless, there are two ways that we human animals are having an effect on the weather: through land use, and through global warming. Land-use change is a big topic, but in general, agriculture and urbanization have led to enormous changes of the Earth’s surface. Cutting down forests generally cause land-areas to become warmer. This will have to be a topic for another time.

We’ll look instead on the effects of global warming: how much more energy the Earth is receiving — and keeping — compared to before the industrial revolution

The effect of greenhouse gas emissions (GHGs) is to increase the amount of energy from the sun that is trapped in the atmosphere. We want a certain amount of GHGs — without them, it would be very cold here. Yet now we’re starting to get too much. Since the first industrial revolution, the amount of carbon dioxide in the atmosphere has increased by almost 50%.

Florida, for example, has more than 1.8 trillion, or 65,620 square miles (170,000 square kilometres). If we do the math on that, then the state of Florida traps 527 gigawatts per hour more today than 250 years ago. In joules, that’s an additional 1.9 petajoules of energy per hour — a number that is becoming comparable with the energy released by hurricanes. This is just counting Florida, not the vast areas of the Atlantic Ocean where the hurricanes spawn. That’s a lot of extra energy hurricanes and other weather systems can draw on.

How exactly this energy affects hurricane development and trajectories is complex, but one known effect is to make hurricanes wetter, containing more water. And more condensation means hurricanes with vastly more energy!

So there you have it! Comparing raw numbers, I think we need to strongly suspect that human energy production does not have a direct effect on hurricane paths. But the GHGs we produce as a biproduct of all this energy use creates global warming, and that is adding enormous amounts of energy to the planet.